The Origin of the Muleteers

The origin of the maragato muleteers dates back to the IX Century in Spain, when Ordoño I, King of Asturias, started the resettlement in the Kingdom of Leon after the Arabians were expulsed. In that moment, the muleteers started their career, with the purpose of providing food as well as other necessary products to the Kingdom of Castilla. The first muleteers were from Astorga and its surroundings, who went on their wagons pulled by mules to Galicia and the north of the Kingdom of Castilla, from where they carried salted fish and carbon back to the new commercial cores located in southern cities of the Kingdom. Those products were changed for sausages, killing products and rain fed products which were transported to the north. For that, the muleteers used the antique Roman roads, specially the one which communicated Astorga and Braga (Lugo), and finally the Silver Road to continue to Madrid. Their daily work used to be around 3 leagues, about 9.3 miles, and they built up wells which they filled with ice in winter (which resisted even during summer) for making the fish transport easier. By this way, they created their own cold rooms for maintaining the fish fresh during the whole journey. The muleteers practiced their profession from April to December, resting the rest of the year. 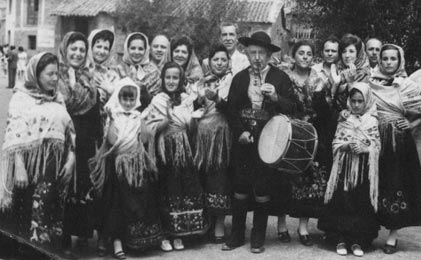 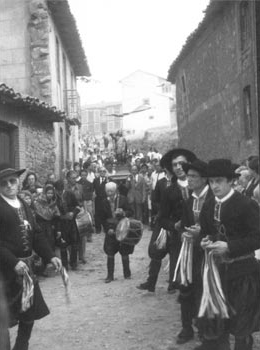 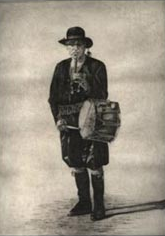 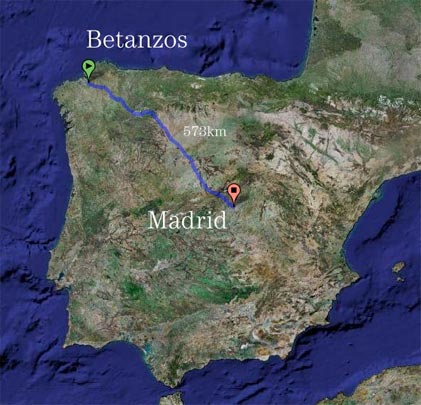 Muleteers: a synonymous of security and trust.

On 20th February 1367, the King Harry II gave the muleteers the privilege of exemption from the payment of Portazgo (a tax all muleteers had to pay when arriving to any city of the Kingdom) because of their excellent labor. This attracted many muleteers from other areas who got established in Astorga and surroundings. The Crown had always maintained a special treat with the muleteers, which explains why did they order them to collect taxes and transport the gold from some regions of Asia and America, from the national ports to the Court. For this service, the maragato muleteers earned double than other muleteers due to the security and trust they inspired, since they were well known for their honesty and loyalty. Furthermore, they had the reputation of defending the load with their own life.

By the time, the job of the muleteers was gaining popularity, fame and respect because of the way they protected the loads, even with their own life. They were considered the most confident transporters to whom the great-valuable goods where consigned on for their honest and loyalty. For this reason, the Crown had always maintained a special treat with the muleteers, ordering them to collect taxes and transport the gold from “las indias” from the ports to the Court. 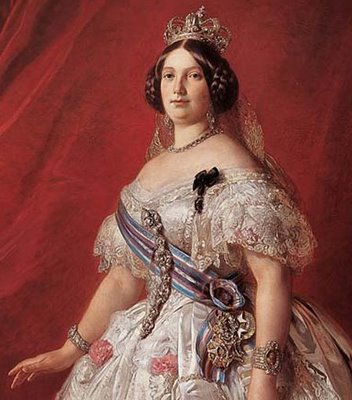 The word of a muleteer must always be kept, notably when it has been given to a lady such as The Queen

Relation between the Crown and the muleteers

There is a curious anecdote from the period of the Queen Isabel II, when the muleteer Don Santiago Alonso Cordero, popular known as “the lamb muleteer”, was chosen for transporting the tubes coming from England, designated to the building of the water channel of Madrid. Once the transportation with the wagons, pulled by mules or horses, began, the barley drastically increased its cost. This was a hard hit for their economy since that cereal was the main aliment of their animals. Due to all this, the muleteers had the right of increasing their rates because the agreed price did not contemplate this setback. Nevertheless, Mr. Santiago did not do it because, we quote, “the word of a muleteer must always be fulfilled, with more reasons if it has been given to a lady like the Queen”.

Things like these made the maragato muleteers’ popularity and influence raise so the tillage of the region was entirely made by their wives as well as the merchandising with oil and soaps; the region stopped dedicating to the above-mentioned textile industry to finally specialize in muzzle. Actually, the influence of the muzzle was so much complex, since it included natality, as practically all the muleteers had more children than the average, as well as the ownership of lands. We can even find some documents which assert some muleteers traveled with servants. It was from this century that the first muleteers’ houses began to be built, which were houses of tillage. They were composed by a big centralyard, surrounded by the rest of rooms. The houses were made of stone and the entrance was a huge gate with a half-point arch. The living room was in the upper floor next to the bedrooms. The bigger the house was, the more importance their owner had. By this way, the maragato muleteers started acquiring the fame of being rich, thanks to their commercial wit and sweat because of their physical work. A hard physical effort due to, not until the XIX century, the road network in Spain was scarce, abrupt and the route was mostly through mountains; so the muleteers traveled with their wagons where neither carriages nor tumbrils could.

Arrival of the railway: Disappearance and legacy of maragato muleteers

In the last third of the XIX century a great advance in the transport of goods was produced that brought a change for the maragato muleteers: the arrival of the railway. This new way of transport for people and goods forced the muleteers to change their habits.

The agriculture of this region of Spain could not sustain so many people so thousands of them set as innkeepers, caravan drivers of groceries or merchants in Galicia or they were finally forced to go abroad, and their money with them, but without losing their merchant habits. They emigrated to America, Galicia and Madrid, where many got established as fishmongers. There were also seasonal migrations of men who spent most of the year in the capital of Spain and returned to the village in summer to help their wives farming.

The trade of muleteer itself disappeared, but the print of the maragato lasted and spread with the migrations.

The maragato carried with them their culture, music, customs and gastronomy, including the famous “cocido maragato”. This dish was the main meal of the farm workers after a hard working day. The “cocido maragato” was made of: soup, cabbage, chickpeas and seven types of meat. This dish was started by its end: they started with the meat and finished with the soup. This tradition is supposed to have its origin in Napoleon’s troops who, because of the constant possibility of entering battle, started with the meat as well. It was elaborated with up to ten different types of meat: sausage, pig’s ear from the slaughter of the previous year, chicken, bacon, cecina, pizpierno, morcillo, rib of cow, bones of substance and pig's nose and a filling composed of beaten eggs, a little of chopped jam and sausage, grated bread and some cloves of garlic. Another important ingredient are the chickpeas, from own harvest, of the “pico de pardal” variety of medium size and very pronounced peak. The tastiest are the ones from Valdiviejas although in Quintanilla are also appreciated. Nowadays, the harvest of chickpeas is located all over the region. Regarding to the soup, it should have thick noodle or bread loaf for making it dense. It is used to be accompanied with natural desserts such as custards or roscon, although in private houses there usually are other desserts such as “donkey rolls”, apples or greaves with butter cakes.

The popular architecture is another characteristic aspect of this region of Leon, where big and fancy muleteer’s houses coexist with more modest ones, which remind the Celt buildings. The typical maragato house has a huge stage that gives a step to the central yard so the wagons can easily entry. The living room was in the upper floor next to the bedrooms. The music and popular custom make meaning too. Among their rituals, “La Covada”, “La boda”, “La fiesta del arado”, etc. stand out. “La Covada” consists in the popular habit in which the mother, during the birth or immediately after, gives the bed to the father. This habit reaffirms the roll or the legitimacy of the father and it is associated to matriarchal societies.

All over the region of Maragatería there is a great devotion for virgins and saints, distributed in every village. In Combarros, the Virgin of Las Candellas and St. María Magdalena are important. There is a proverbial that the locals use when somebody, without apparent or justifiable reasons, decides to suddenly change their behavior, which is “¡Ya está vuelto Pedro Mato!” that could be translated into “Pedro Mato has changed his opinion!”. There is a similar expression in English for you to get a clue: “He/She changes with the wind”. In fact, Pedro Mato behaved that way. That refers to the name that habitants of Astorga gave to a giralda that occupies a turret of the apse of their Cathedral. It represents a legendary and enigmatic character that has turned into the symbol of the city. It is still a mystery who actually was Pedro Mato and what he did for him to be placed over the highest point. But documentarily talking, his existence cannot be justified. 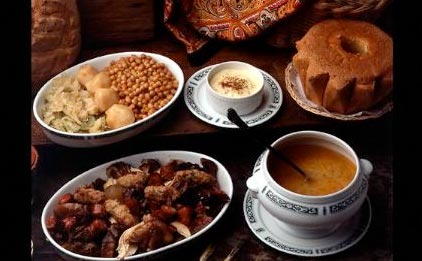 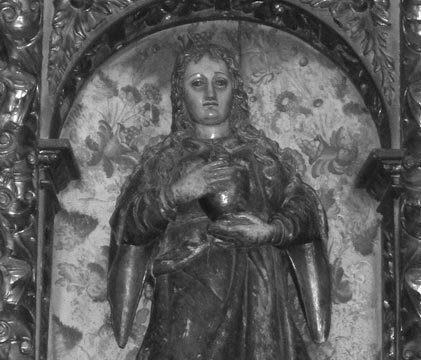 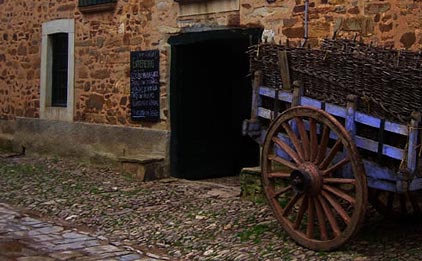 Territories with influence of the maragato muleteers

In the XVIII century, the maragatos were the first settlers of La Patagonia and they founded several cities such as Carmen de Patagones, Mercedes de Patagones (currently Viedma), San Julián and Puerto Deseado. They also spread in Uruguay and founded the city of San José de Mayo. Nowadays, the settlers of San José de Mayo are known as maragatos. Furthermore, the custom of gaucho is a heritage of the popular customs of the maragatos, it is easy to see at a glance that both are quite similar.

Since 1911, we work with the best seafood

The product is served in the best conditions

We also serve in our physical store

WE CHOOSE FOR YOU