On October 15th 1911 the Company Lamigueiro and Jové was inscribed in the Business Registration of La Coruña (Spain) and Pescaderías Coruñesas, S.A. was constituted, with an initial capital of 200.000 pesetas which was equally contributed by the two partners/associates Mr. Luis Lamigueiro and Mr. Manuel Jové for the purpose of dedicating to fishing and its exploitation.

The enterprise grew rapidly with Madrid as the main destination of its products, so the corporate headquarters were transferred there in 1917.

Due to the size and importance the business had already acquired, the main personalities of the time, including His Majesty the King Alfonso XIII, attended the inauguration. 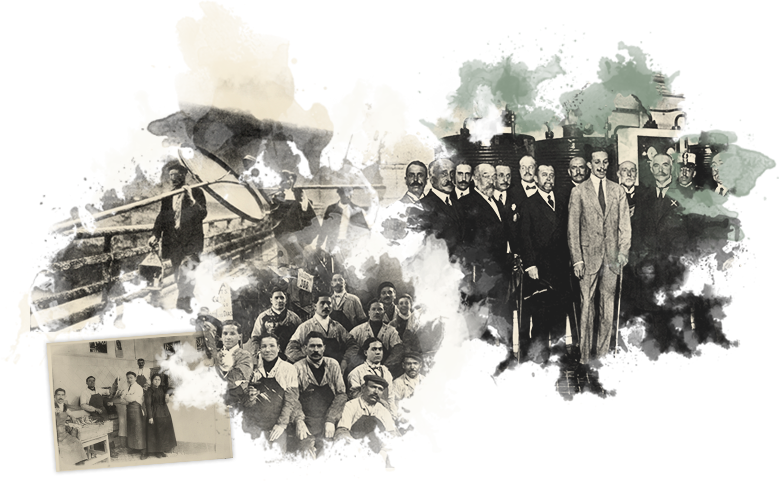 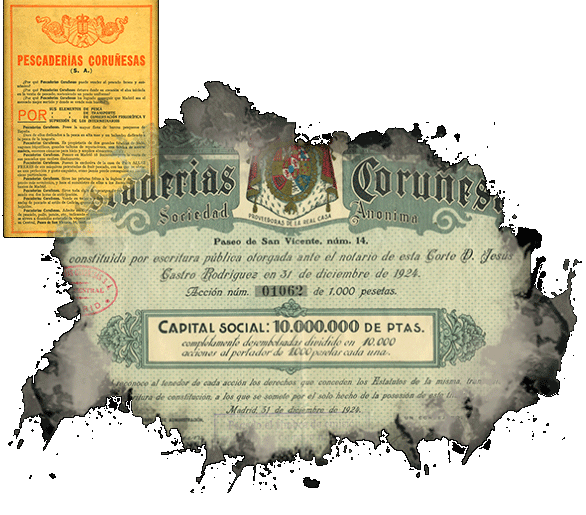 In 1920 its capital was 2 million pesetas, which grew to 10 million in just three years. It turned into a vertically integrated enterprise, owning four trawlers,  whose names were Viking, General Gordon, Sirius and Reina Victoria; marine warehouses, a fleet of vehicles in Madrid, a salting factory in La Palloza, as well as ice factories in the ports where it operated.

Furthermore, it owned a fishing nets manufacturer as well as some refrigerated trucks for transporting the fish. In 1923 the horizontal expansion of the enterprise started thanks to the purchase of the company Pesca y Navegación, S.A. They also bought seven vessels valued at 1.500.000 pesetas, giving them 11 ships becoming thus the first Spanish company with that number of operative ships.

In 1956 Mr. Luis Fragío Babío suggested they acquire the new headquarters of Pescaderías Coruñesas owned by Mr. Norberto García, Mr. Santiago Gómez’s brother in law, the muleteer who started La Astorgana in 1890. At the time sales levels were low, so the purchase was a risky venture which also involved taking on the eight members of the workforce. Some years later, he married Mss. María Rosa, Mr. Santiago’s daughter, and they together took over the business when Mr. Santiago retired.

From the union of this couple, on June 9th 1933 Mr. Evaristo García Gómez was born in Combarros, León. To begin with, he was in charge of dispensing the fish products to the clients.  When he was 14, he switched to taking the fish market phone orders. From the age of 19, Evaristo focussed on improving his professional development and working more independently, although it was not possible at that time. This changed at the age of 23 when his father, Mr. Norberto Garcia, bought Pescaderías Coruñesas from Mr Luis Fragío Babío.

The evolution and adaptation to its clients’ needs were gradually consolidating Pescaderías Coruñesas’ success. The number of clients increased and they were not only from Madrid but from other areas of Spain, making the enterprise a national one for the sales of fish and seafood, even setting guidelines for an export trade. 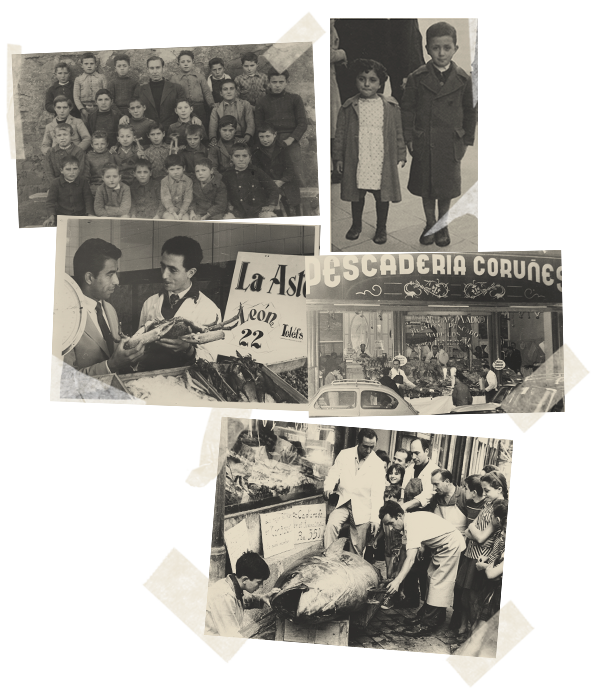 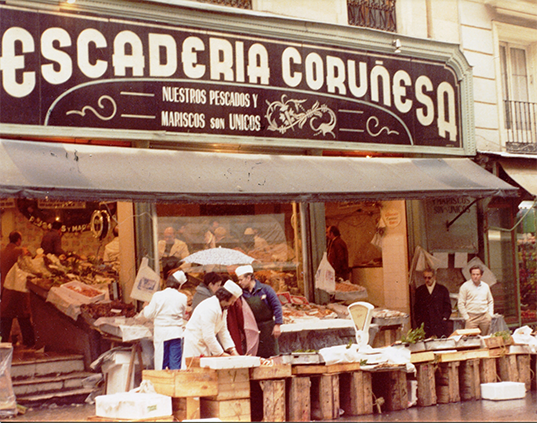 Pescaderías Coruñesas was the best port in the capital city of Spain.

The enterprise continued growing and in 1982 Evaristo decided to buy the market stall “Esencia de Mar” at Mercamadrid. In this decade, the workforce of 40 people kept expanding, to address the non-stop-growth in number of clients.

As a result of this, Pescaderías Coruñesas was relocated to Juan Montalvo Street, in 1986, giving it more than 2.500 m, leaving behind those years on Recoletos Street, to start a new stage of growth, ². Pescaderías Coruñesas had its headquarters in this location, in addition to more space for La Tienda, cold stores, handling and preparation rooms for the orders, warehouses and offices.

Pescaderías Coruñesas was the best fish dealer in the capital city of Spain.

In 2004, when Mr. Norberto and Mr. Diego García Azpíroz, Evaristo’s sons and fourth generation of fishmongers and muleteers, were already in charge of the enterprise, there was an improvement and extension of the installations of Pescaderías Coruñesas. The headquarters on Juan Montalvo happened to have more than 3.000 m² of space. Times change, bringing new technological advances which transform and improve the way of working. The result is a consequence of another principle of its philosophy: Tradition and Innovation. This ensures that the fish and seafood will be always in the best hygenic conditions and quality.

The Internet was a great feature of the late twentieth century, finally established in the XXI century, the consequence of the implementation and subsequent acceptance of the new technological advances. Pescaderías Coruñesas, loyal to its principles of “Tradition and Innovation”, launched its website in April 2008 www.pescaderiascorunesas.es, to share its passion for the sea with everybody. 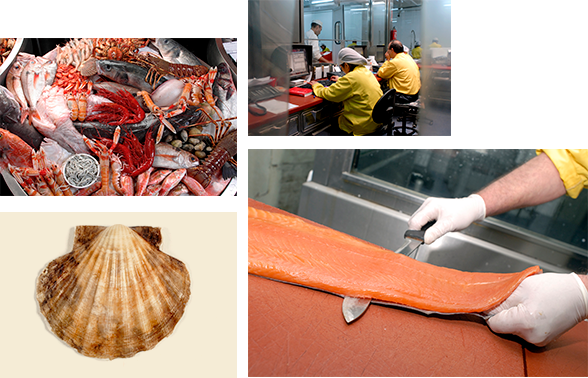 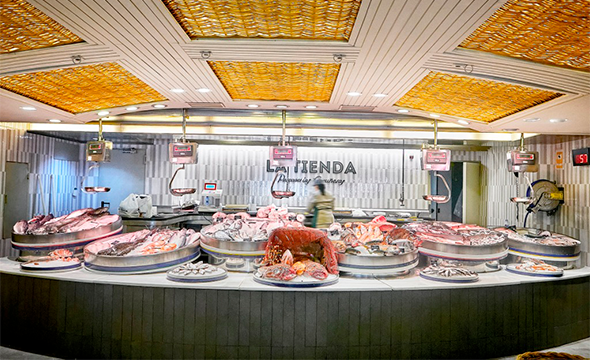 Since the launch, the feedback has been positive, exceeding one million web views and 200.000 users in the first year and reaching the 1 million users and several millions of web views in the following years. After this, the next challenge was embracing online sales. This happened three years later, in April 2011.

Another of Evaristo’s dreams was entering the catering sector.This dream came to fruition in 1975, when he bought José Fidalgo Veloso El Pescador. Some years later, in 1981, he bought José Chas and José Fajardo O’Pazo, which would become its second restaurant. On November 16th 2011 his sons started the family’s third restaurant, Filandón, the country in the city. And lastly, a new business was open in 2014, Albada Catering.

Among the innumerable awards Evaristo García has received, the most important ones are the following: 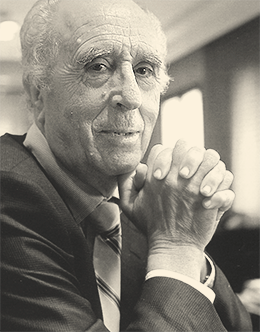 Since 1911, we work with the best seafood

The product is served in the best conditions

We also serve in our physical store

WE CHOOSE FOR YOU